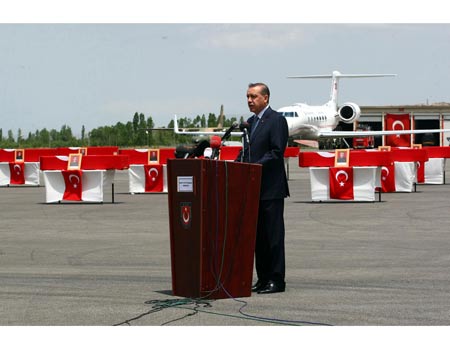 The Kurdish resistance Attacked Yesterday the Turkish military outpost on the border with Iraq, killing nine soldiers using explosives. Air Force was quick to respond
Announced that he could eliminate the members of the cell. But according to residents, the gunmen were not the only casualties in the incident.

Ckermnge Azat, head of the county Ibril Surane town on the border of Iraq, said fighter jets bombed seven villages in the attack which began last night at 20:30 and lasted about 90 minutes. According to him, a girl killed by bombing planes while her brother, a toddler of three, and her mother were injured. This is the first report of damage to the Kurdish civilian population last week.
In recent months there has been Escalation Armed struggle between the Turkish military operatives in northern Iraq Kurdish resistance. Turkish warplanes bomb targets tend to rebel Turks, but they often operate out of civilian population and try to hide in the villages.

Over the weekend the Turkish military officials announced that more than 100 armed Kurds Killed Air Force attack in Iraq last month, as 43 soldiers. The last major operation conducted by the Turkish army took place in February 2008 when
Ten thousand soldiers Crossed the border Kurdish territory in Iraq and received assistance from the Air Force. Turkey claimed that Killing 24 rebels suffered 237 casualties among its forces.
Rebel organization "Kurdistan Workers Party (PKK) was included in the list of terrorist organizations of the United States and European Union. Turkey claims that the underground is responsible for the deaths of about 40 thousand people since it began the armed struggle against Turkey and the Kurdish minority for his country in 1984