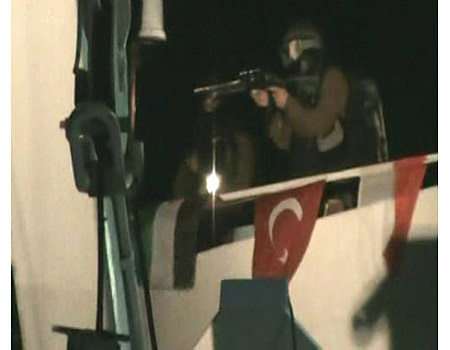 A brutal ambush at sea in courtesy of the Palestinians

Ron Ben Yishai recounts bloody clash aboard Gaza-bound vessel: The lacking crowd-dispersal means, the brutal violence of ‘peace activists,’ and the attempt to bring down an IDF helicopter

Our Navy commandoes fell right into the hands of the Gaza mission members. A few minutes before the takeover attempt aboard the Marmara got underway, the operation commander was told that 20 people were waiting on the deck where a helicopter was to deploy the first team of the elite Flotilla 13 unit. The original plan was to disembark on the top deck, and from there rush to the vessel’s bridge and order the Marmara’s captain to stop.
Officials estimated that passengers will show slight resistance, and possibly minor violence; for that reason, the operation’s commander decided to bring the helicopter directly above the top deck. The first rope that soldiers used in order to descend down to the ship was wrested away by activists, most of them Turks, and tied to an antenna with the hopes of bringing the chopper down. However, Flotilla 13 fighters decided to carry on.

Navy commandoes slid down to the vessel one by one, yet then the unexpected occurred: The passengers that awaited them on the deck pulled out bats, clubs, and slingshots with glass marbles, assaulting each soldier as he disembarked. The fighters were nabbed one by one and were beaten up badly, yet they attempted to fight back.
However, to their misfortune, they were only equipped with paintball rifles used to disperse minor protests, such as the ones held in Bilin. The paintballs obviously made no impression on the activists, who kept on beating the troops up and even attempted to wrest away their weapons.
One soldier who came to the aid of a comrade was captured by the rioters and sustained severe blows. The commandoes were equipped with handguns but were told they should only use them in the face of life-threatening situations. When they came down from the chopper, they kept on shouting to each other “don’t shoot, don’t shoot,” even though they sustained numerous blows.

The Navy commandoes were prepared to mostly encounter political activists seeking to hold a protest, rather than trained street fighters. The soldiers were told they were to verbally convince activists who offer resistance to give up, and only then use paintballs. They were permitted to use their handguns only under extreme circumstances.
The planned rush towards the vessel’s bridge became impossible, even when a second chopper was brought in with another crew of soldiers. “Throw stun grenades,” shouted Flotilla 13’s commander who monitored the operation. The Navy chief was not too far, on board a speedboat belonging to Flotilla 13, along with forces who attempted to climb into the back of the ship.
The forces hurled stun grenades, yet the rioters on the top deck, whose number swelled up to 30 by that time, kept on beating up about 30 commandoes who kept gliding their way one by one from the helicopter. At one point, the attackers nabbed one commando, wrested away his handgun, and threw him down from the top deck to the lower deck, 30 feet below. The soldier sustained a serious head wound and lost his consciousness.
Only after this injury did Flotilla 13 troops ask for permission to use live fire. The commander approved it: You can go ahead and fire. The soldiers pulled out their handguns and started shooting at the rioters’ legs, a move that ultimately neutralized them. Meanwhile, the rioters started to fire back at the commandoes.

“I saw the tip of a rifle sticking out of the stairwell,” one commando said. “He fired at us and we fired back. We didn’t see if we hit him. We looked for him later but couldn’t find him.” Two soldiers sustained gunshot wounds to their knee and stomach after rioters apparently fired at them using guns wrested away from troops.

During the commotion, another commando was stabbed with a knife. In a later search aboard the Marmara, soldiers found caches of bats, clubs, knives, and slingshots used by the rioters ahead of the IDF takeover. It appeared the activists were well prepared for a fight.
Some passengers on the ship stood at the back and pounded the soldiers’ hands as they attempted to climb on board. Only after a 30-minute shootout and brutal assaults using clubs and knifes did commandoes manage to reach the bridge and take over the Marmara.
It appears that the error in planning the operation was the estimate that passengers were indeed political activists and members of humanitarian groups who seek a political provocation, but would not resort to brutal violence. The soldiers thought they will encounter Bilin-style violence; instead, they got Bangkok. The forces that disembarked from the helicopters were few; just dozens of troops – not enough to contend with the large group awaiting them.

The second error was that commanders did not address seriously enough the fact that a group of men were expecting the soldiers on the top deck. Had they addressed this more seriously, they may have hurled tear-gas grenades and smoke grenades from the helicopter to create a screen that would have enabled them to carry out their mission, without the fighters falling right into the hands of the rioters, who severely assaulted them.